Some years ago I discussed the nature of democracy with one of my American colleagues. The question of Scottish independence was on the political horizon, so I asked him how the USA would react if the Southern States decided to break away from their Union. “Well they tried it once and we fought them, if they try it again we will fight them again”.

The United Kingdom has agreed

to the most forward leaning demonstration of democracy in the world – the breakup of a 300 year political, economic and cultural union that had brought stability and prosperity, in the interests of the betterment of a single nation. It’s an interesting experiment for academic observers but for the people of Scotland it is the start of a voyage into stormy waters.

We should be under no illusions about the impact of the referendum, regardless of the outcome. It’s about change on a grand scale with uncertain outcomes and it’s already generating considerable conflict.

Most people liken change to turning a supertanker. It might take time but if you hold the course long enough you will accomplish your goals. Unfortunately it is simply not that easy. Research from the Chartered Institute of Personnel Development indicates that only 30 – 40% of changes in business achieve their stated goals. Those that fail usually result in loss of market position, removal of senior management, loss of stakeholder credibility, loss of key employees and decreased motivation of staff. Business is one thing but changing a nation will be much, much harder.

Bristol riots of 1832 following the rejection of the Reform Bill

The fundamental problem for those seeking change is that human beings hate it. Change unsettles them and threatens their values. Aside from the purely practical issues, change is a deeply emotional matter. Just ask somebody who has moved house or changed schools recently.

People forget that the decision to change direction is only the first step on a challenging road. The change must be planned, implemented and consolidated to ensure a smooth transition. You force through change at your peril as illustrated by the continuing In/Out debate about Europe, 30 years after the UK’s last referendum.

The Scottish Referendum is the starting point and in itself will not guarantee a successful outcome. It will, however, open fault lines within Scotland. The problem is that a referendum is an adversarial contest. Its about argument rather than debate, positioning rather than consensual agreement. Someone will win and someone will lose.

We all know how we feel when we back a party that loses an election – disbelief, denial, anger and finally acceptance with the rationale that it’s only 5 years. However, this referendum is for something permanent, something with which future generations will have to live.

conversion from anger to acceptance but might remain trapped in what is best described as the “pit of despair”. If this happens Scottish politics could well be redrawn on separatist and unionist lines, splitting communities and families in a bitter political war that would make the miners’ strike look like child’s play.

The second issue is the complexity of the arguments.  Few people are able to work their way through the various effects of independence with both sides producing visions of future sunlit uplands. How do we know what is right, if those people who look at these issues for a living cannot agree amongst themselves?

Laurence Brunton, landlord of the Castle Hotel on Dunbar High Street still has to make up his own mind on the referendum question. “I keep swithering, and I think a lot of people are the same. Are you better with the devil you know? One side says you’ll be this much better off, the other says this amount worse off. It’s a gamble.”

Based on the most recent polls the 30% of undecided voters hold the key to independence and how they vote on the day will be crucial. Persuade enough of them and Alex Salmond will achieve his life’s work. It must be a tempting thought to promise people the world to attain the political dream.

Politicians on both sides of the argument must remember that the voting will be emotional, more emotional than in any previous election in Scotland. Any failure to deliver on expectations and promises will result in a catastrophic backlash. A referendum won on the basis of broken promises or unfulfilled expectations will be regarded as betrayal and as I have written previously, betrayal is the worst sin.

So, will Scotland’s southern neighbour fight to prevent separation? No, absolutely not, but the Scots may well fight amongst themselves unless there is good, honest leadership. Unfortunately, as we have all come to realise over the last two decades, these attributes are rare commodities in modern politicians.

Good luck to you all and mind how you go. It’s going to be stormy out there. 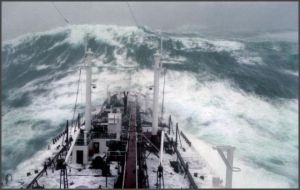